Meet the stars and flops of the 2014 FIFA World Cup

Meet the stars and flops of the 2014 FIFA World CupFootball 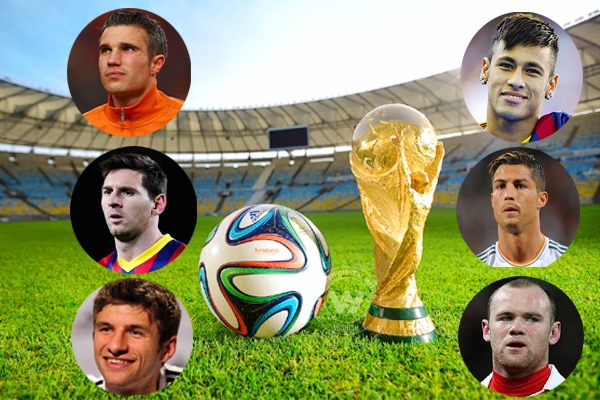 (Image source from: Meet the stars and flops of the 2014 FIFA World Cup})

After one-one match each in the ongoing 2014 FIFA World Cup Brazil, the goal tallies of soccer stalwarts – Robin van Persie (Netherlands) and Lionel Messi (Argentina) stands at equal, with their past records from the previous two World Cups combined. Finally, two of soccer's biggest new-age stars are shining where it matters most.

While it took both Van Persie and Messi three World Cup tournaments to find their ground, a few other strikers seems to be getting on their toes from day one of the World Cup.

Thomas Mueller, joint top scorer with five goals in the last tournament, grabbed a hat trick on Monday as Germany pummeled Portugal 4-0 in their maiden match of the tournament.

So did the 22-year-old Brazil's budding soccer star, Neymar, who slotted two goals on his World Cup debut as Brazil defeated Croatia 3-1 in the first match of the tournament. Neymar, however, failed to recreate the magic on Tuesady's match against Mexico, all credits to amazing goalkeeping by Mexican goalie Guillermo Ochoa.

Then there are world's best players like Cristiano Ronaldo, the ballon d'or winner for this year, and England's Wayne Rooney, whose miserable World Cup forms continues to this tournament. Ronaldo's only goal in last World Cup tournament in South Africa was against North Korea, where Portugal defeated North Korea 7-0. Sadly, he and his team were shut out in their first game in Brazil.

Rooney, who started out of position on the left wing, could make no major contribution for his team as England played a great game, but ultimately lost 2-1 to Italy.

Messi, however, managed to break his World Cup jinx this year by scoring a goal for Argentina in their debut 2014 World Cup match. He left South Africa without a goal in 2010. His last previous World Cup goal came during the Germany World Cup in 2006.

Van Persie and Messi not only broke their World Cup dry spells, but the sheer quality of their strikes became the talking point of the tournament. And you thought Neymar was the only star shining in the World Cup.

Karim Benzema, the French player who was left out of the squad four years ago, slotted nearly a hat trick in his first World Cup match, netting two and having a hand in an own goal as Les Bleus routed Honduras for 3-0.

Luis Suarez might not kick another ball in the World Cup again?