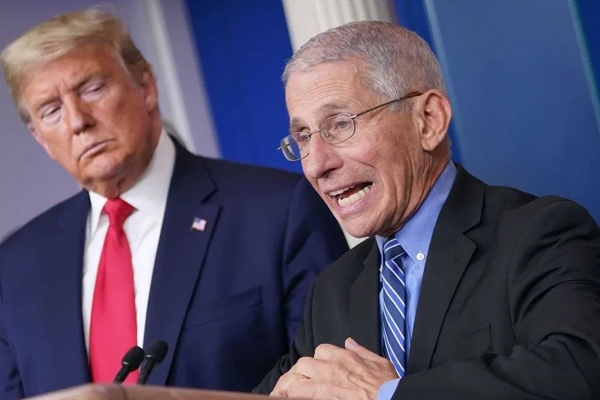 US could start reopening in May: Anthony Fauci reports suggest that U.S might be ready to reopen things gradually from next month. The same statement was issued by Anthony Fauci, head of the National Institute of Allergy and Infectious Diseases to CNN in an interview.
https://www.wishesh.com/ 13 Apr, 2020 13 Apr, 2020

US could start reopening in May: Anthony FauciTop Stories

But, on the other end, reports suggest that U.S might be ready to reopen things gradually from next month. The same statement was issued by Anthony Fauci, head of the National Institute of Allergy and Infectious Diseases to CNN in an interview.

While President Donald Trump did initially insinuate that the numbers could get better by April and they could open the economy by then, the citizens preferred getting their work done at home. The churches conducted all the celebrations online to ensure that there is no further spread of the virus.

The number of fatalities is lesser than what it was the day before at 1,920 which was one of the reasons why Dr. Fauci could profess that statement about the possible lift on the restrictions. But, even that is tentative and not something that one can set in stone.

In a televised interview, Fauci stated saying that there are chances that the restrictions could be lifted in May but with caution.

“I think it could probably start at least in some ways maybe next month,” he stated.

Fauci said that the bigger picture of the scenario will be clear by the end of this month. If they find everything clear and things do start getting better, it is likely that they might get things back to normal gradually but cautiously. If things don’t get better, then the restrictions are likely going to stay imposed.

He also said that regions would be different at different paces. The worst hit states will likely take some time to become operational while the least hit ones could get better with time.

Even New York governor, Andrew Cuomo stated saying, “We want to reopen as soon as possible. e caveat is we need to be smart in the way we reopen."

“If we start to get back on our feet too soon, I fear, based on the data we're looking at, we could be throwing gasoline on the fire," Murphy said in an interview to CBS.

This is actually true as there are patients who are asymptomatic and have not been tested yet. In case the restrictions are lifted early, there are higher chances of resurgence, which is one of the worst case scenarios that the country could further face.

President Trump shared his excitement via twitter saying, “We are winning, and will win, the war on the Invisible Enemy!"

Even Dr. Anthony Fauci has said that he is “cautiously optimistic” as the rate of the confirmed cases and the overall rate of the hospitalisations have declined gradually. The country has been reporting around 2000 deaths per day, which again is reducing gradually.

New York, which is the worst hit state of the country, reported 758 deaths in the past 24 hours, according to Governor Cuomo.

With the rise in the economic recession and with over 17 million people losing their jobs since this virus, it is likely that United States needs to fight back and that too, fast.