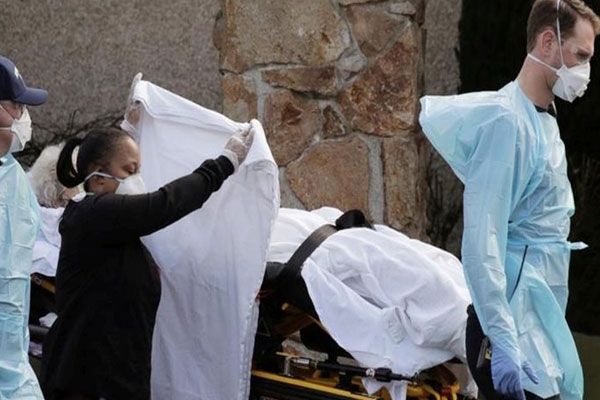 US enters the hardest week of Coronavirus crisis reporting 9000 deaths With the predictions from the scientists and the researchers, it is believed that US has now entered into its hardest and saddest week.
https://www.wishesh.com/ 06 Apr, 2020 06 Apr, 2020

United States has been reporting their consistent rise in the Covid-19 cases which have now surpassed 300,000 cases, the highest reported in the world till now. With the predictions from the scientists and the researchers, it is believed that US has now entered into its hardest and saddest week.

New York reported over 600 deaths on Sunday, taking the total of the state to 4.159 and over 122,000 confirmed coronavirus cases.

With the overwhelming turn of events, the bodies of the deceased victims have been stacked up in orange bags in a makeshift morgue outside of the Wyckhoff Heights Medical Centre that is located in Brooklyn. The reports were published in Reuters.

US Surgeon General Jerome Adams, in an interview with Fox News, reported saying that the hard time for US are on the way but there is light at the end of the tunnel if everyone cooperates with the situation and helps in eradicating the spread further.

Apart from New York, states like Pennsylvania, Colorado and Washington DC have also been witnessing a sharp rise in the death toll. The coronavirus task force from the White House alarmed their citizens saying that now is not the time to overcrowd the grocery stores or being outside the houses.

Most of the states in the country have imposed stay at home orders and only leave their house in case there is need for any essential items. This is the only way to slow down the spread of the virus.

However, there have been reports that few churches have been holding large gatherings because of the start of the Holy Week at the Christian churches.

Tony Spell, pastor at the Life Tabernacle megachurch stated saying, “We're defying the rules because the commandment of God is to spread the Gospel.” Spell has defied the state orders and has already been hit with six misdemeanours for the same.

Following New York, Louisiana is considered to be the next hotspot in the United States, reporting over 12,000 confirmed cases with over 400 single day deaths.

Governor John Bel Edwards of Louisiana stated in a statement to CNN that with the overwhelming rise in the cases, there are chances that the state might run out of ventilators by the coming Thursday.

The expert team at White House has reported an estimated death toll between 100,000 to 240,000 in the United States which is daunting. The numbers can get worse of better, depending on how people handle the situation and be responsible during this time of crisis.

In a press conference on Saturday, even President Donald Trump said that the toughest and the harsh days for United States are ahead.

Washington state Governor Jay Inslee stated saying that if people don’t take this seriously and ensure better responsibility during this time, it is likely that the same will help the virus spread more.

Inslee further said that it is necessary that US imposes a national stay at home order to help contain the spread and ensure that the numbers don’t reach to a point that it becomes impossible for the medical system to support the citizens.

Republican Arkansas Governor Asa Hutchinson, on the other hand, stated that this state wide lockdown is good enough at the moment and that the experts are closely monitoring the situation and necessary steps will be taken, if need be.