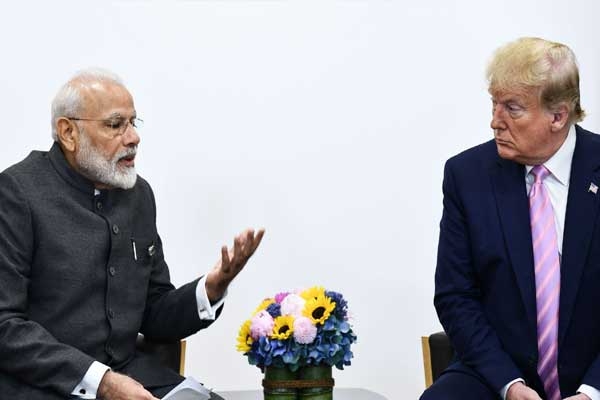 Political Storm in India as Donald Trump Claims Narendra Modi Asks for Kashmir Mediation Trump set off a political storm in India by claiming that Modi had asked him two weeks ago to mediate in the Kashmir dispute.
https://www.wishesh.com/ 23 Jul, 2019 23 Jul, 2019

After President Donald Trump said Prime Minister Narendra Modi had invited him to mediate in the bloody conflict with Pakistan over Kashmir, India's foreign minister issued an arduous denial to an infuriated opposition in parliament on Tuesday.

Trump set off a political storm in India by claiming during a meeting in Washington on Monday with Pakistani Prime Minister Imran Khan that Modi had asked him two weeks ago to mediate in the Kashmir dispute.

"I'd like to categorically assure the house that no such request was made by the prime minister to the US president," Foreign Minister S. Jaishankar told the Indian parliament, barely able to make his voice heard over the opposition tumult.

Jaishankar insisted the conflict could only be settled bilaterally and that Pakistan had to end "cross-border terrorism" before any talks.

On Tuesday, tensions resumed across the line of control as firing broke out, violating a ceasefire between the two nations. There were no immediate reports of casualties.

Indian opposition leaders demanded that Modi make a personal statement to parliament to confirm that there was no change in New Delhi's longstanding policy of only direct talks with Islamabad.

Khan - on an official visit to the United States - triggered the controversy further by saying Kashmir could only be resolved with outside help.

"Bilaterally, there will never be (an end to the Kashmir conflict)," Khan told Fox News, adding that Pakistan and India were "poles apart".

Some U.S. politicians quickly distanced themselves from Trump's comments.

Brad Sherman, a Democratic Congressman and member of the House foreign affairs committee, said he apologized to the Indian ambassador in Washington for Trump's statement.

"Everyone knows PM Modi would never suggest such a thing. Trump's statement is amateurish and delusional. And embarrassing," he tweeted.

The State Department also sought to calm the storm.

"While Kashmir is a bilateral issue for both parties to discuss, the Trump administration welcomes #Pakistan and #India sitting down and the United States stands ready to assist," tweeted Alice Wells, the Acting Assistant Secretary of the department's Bureau of South and Central Asian Affairs.