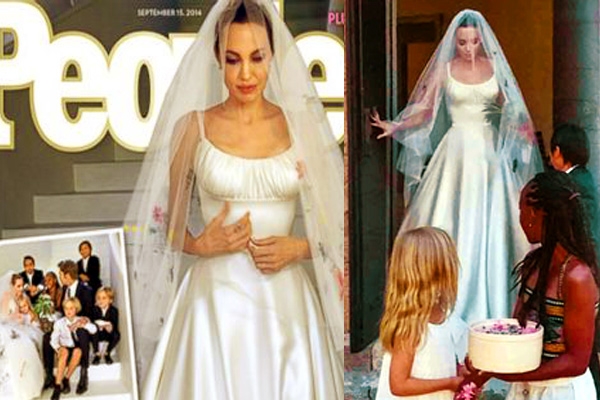 (Image source from: Brangelina donate $5 mn made from wedding picture})

Hollywood couple Brad Pitt and Angelina Jolie made a total sum of $5 million from their wedding pictures. The photos were published in the current issues of People and Hello! Magazines. The power couple have decided to give the entire amount to charity.

Brad Pitt and Angelina Jolie said their wedding vows on August 23 at their French estate Chateau Miraval. The wedding was a highly secret affair attended by not more than 22 people.

The star couple, well known for their philanthropic efforts, will reportedly donate $5 million towards charity.

Both People and Hello! magazine paid $2.5 million separately for a select few wedding pictures of Brad Pitt and Angelina Jolie.

"Hello! bought the international rights to Brad and Angelina's wedding pictures. Prior to the wedding, Brangelina personally chose the photographer for the wedding.

The newly wed couple were aware that their wedding pictures would be of tremendous interest to media. So they sold the rights to People and Hello! and will now donate the amount to their charitable foundation.

This is not the first time that the star couple has done this. Earlier in 2008, the couple made a $14 million for published pictures of their twins, Knox and Vivienne. Even then they had donated a large amount to charity.

Brangelina to tie the knot at French home

Brangelina to have four destination weddings

It's going to be a Disney-themed wedding for Brangelina!

Brangelina to shoot a love story in Malta