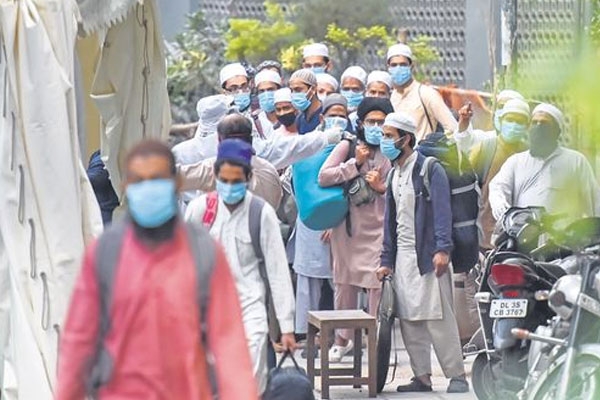 Inaction on Delhi police and government’s part led to Covid-19 outbreak? Currently, out of all the screening that has been done, 93 confirmed cases have come up with the condition, including 45 in Tamil Nadu, 9 in Andaman, 15 in Telangana and 24 in Delhi.
https://www.wishesh.com/ 01 Apr, 2020 01 Apr, 2020

If you have kept up with the news, it is likely that you know about the sudden surge in the Covid-19 cases owing to the reports of the Tablighi Jamaat that was held in the Nizamuddin Mosque in Delhi. While the country is already in a stage of crisis, it looks like the event could have been a possible contributor to the surge in the confirmed cases that we are witnessing around.

Reports suggest that the inaction from Delhi police and the government is likely the primary reason behind this coronavirus outbreak in the country. They believe that time action from the authorities could have suppressed the possible spread stemming from Tablighi Jamaat in the country.

According to the reports issued by the Ministry of Home Affairs, they stated that around 824 foreign nationals attended the event held in the Markaz Nizamuddin in Delhi and then went across the country on preaching tours or “Chilla”.

The issue that happened is the fact that neither the Delhi police nor the government took necessary steps to contain the movement of the preachers or even vacate the premises.

The foreign nationals who have been staying in the Nizamuddin mosque hail from countries like Indonesia, Malaysia, Thailand, Nepal, Myanmar, Bangladesh, Sri Lanka and Kyrgyzstan and stayed at the Banglewali Mosque at the Hazrat Nizamuddin in New Delhi.

Following attending the Tablighi activities, the individuals did travel to various parts of the country to then preach about the religion.

Further reports from the Home Ministry suggest that around 1,746 people were staying in the Hazrat Nizamuddin Markaz, out of which, 216 were foreigners.

The details of 824 foreigners who went out for preaching across the country were shared with the Delhi police and government to identify them and isolate them to ensure maximum prevention of the risks of community spread.

Aside from that, a large number of the Indian Tablighi Jamaat workers who were preaching have also been out around the country doing Chilla.

A case has been filed against Maulana Saad and others of Tablighi Jamaat with the charges with the “Section 3 of Epidemic Disease Act and Sections of the Indian Penal Code (IPC) for violating the government directions given to the management of Markaz of Basti Nizamuddin regarding restriction of social, political, religious gathering and for taking safety measures, including social distancing for prevention and treatment of the Covid-19 viral infection.”

In retaliation to that, the Markaz has informed stating that they have indeed informed the Delhi police and government but no necessary steps were taken for the condition. They exclaimed that they didn’t receive any timely response.

The Markax spokesperson, Mohammed Ashraf stated saying, “We informed the Delhi Police and SDM on March 23 about the number of people inside the premises. We even asked for vehicles so that they can be sent to their respective places but nothing was done.”

Till March 31, 2020, around 1,203 Tablighi Jamaat individuals have been screened, out of which 303 individuals showed the signs of the coronavirus and have been referred to different hospitals in Delhi for further screening.

The rest of the individuals have been sent to various quarantine centres around Narela, Sultanpuri and Bakkarwala.

The ministry has also advised the police authorities to collect the name of all the Indian Tablighi Jamaat workers from the coordinators, locate their current location and advise the state government and officials to quarantine and screen them as per the norms.

Currently, out of all the screening that has been done, 93 confirmed cases have come up with the condition, including 45 in Tamil Nadu, 9 in Andaman, 15 in Telangana and 24 in Delhi.