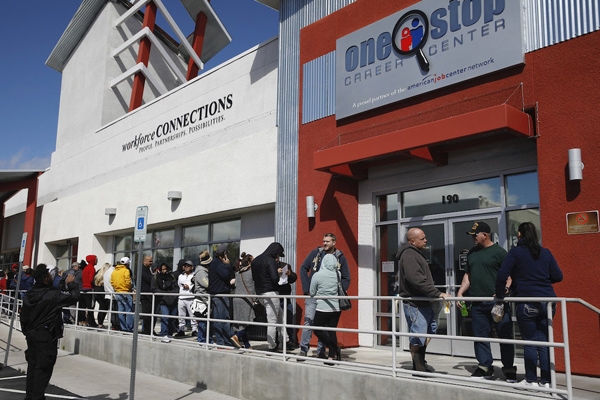 Unemployment in U.S rise to 6.6 million in a week amidst pandemicTop Stories

While the world has been fighting the coronavirus pandemic, the one thing that U.S has been struggling with is unemployment as well. With over 16 million layoffs in the last three weeks, the country reported the highest spike with 6.6 million unemployment in the last week itself.

U.S has the maximum number of confirmed cases at over 468,000 and the numbers are consistently rising. The coronavirus pandemic has also brought the overall economy of the country to a standstill.

With the shutdown across the country because of the coronavirus pandemic, close to 10 million people have lost their jobs in the last two weeks. The layoffs started off first in the leisure and restaurant industry and have now impacted the construction, manufacturing and even the healthcare industry.

The sudden hit of the recession suggests that more people have lost their jobs in the last two weeks than what had been lost in the last two year of recession. The unemployment bar is increasing every single day and in every state as well and the economists believe that it is likely that the rate of unemployment will soon cross over 15%.

The maximum layoffs were seen in California, followed by New York, Michigan and Florida.

The latest impacts of the devastation in the field of unemployment came along with the rapid spread of the virus across the country. U.S is adding to the number of confirmed cases every single day, standing at over 468,000 confirmed cases and over 16,000 deaths.

The numbers are no doubt extremely stark, but the economists have reported that the same doesn’t necessarily show any impacts on the long term impacts of Covid-19 on the economy.

Dean Baker, a senior economist at the Center for Economic and Policy research stated that the current figures don’t necessarily indicate a loss of demand. He believes that while the virus was not in anybody’s control, the economy is and it is people who are shutting it down further.

A sharp boundback is very possible but the same will require stern contribution from the government and a coherent plan when it comes to reopening the economy again.

Even the latest reports suggest that the Federal Reserve is also working on making around $2.3 trillion available for the small and the mid-sized companies in the various states in U.S.

Further sharp spikes in the US unemployment are likely going to come around in the coming weeks. Two of the most important states, Florida and Texas, which account for 15% of the countries payrolls closed down the non-essential businesses in the middle of last week owing to the lack of business.

States have also gone forward to provide with unemployment benefits to the gig workers who have been hit the worst because of this pandemic. But, not all of them have made the claims yet. Some other have stopped working for their health and are yet to apply for the same.