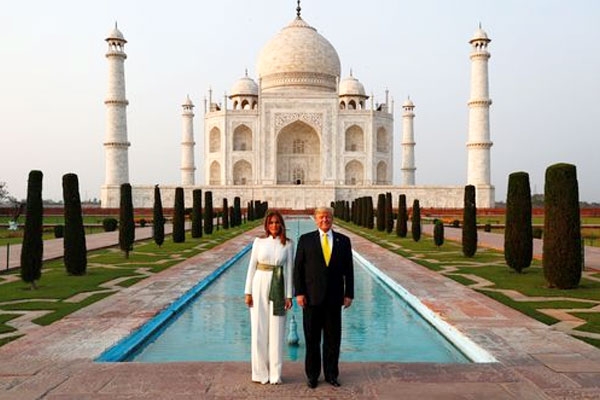 The President of the United States Donald Trump along with the First Lady Melania Trump has paid a visit to Taj Mahal which is the iconic monument of India where they have strolled around the famed mausoleum that has been built as a monument of love in the 17th century of the Mughal era.

The Taj Mahal that has been refurbished for the visit of the US President was built as a epitome of love by the Mughal Emperor Shah Jahan in the memory of his beloved wife Mumtaz Mahal who had expired in the year 1631.

The President Donald Trump and the First Lady Melania Trump have been briefed about the history and the importance of the Taj Mahal and they had later wrote what they had felt about the monument in the visitor’s book where in he had also thanked the country India.

US President Donald Trump's message in the visitor's book at the Taj Mahal- "Taj Mahal inspires awe, a timeless testament to the rich and diverse beauty of Indian culture! Thank you, India". pic.twitter.com/QtD87OeiYk

The local residents were filled with excitement as the President of the United States was visiting Agra and Taj, and have welcomed Donald Trump to India by displaying their own banners.

The convoy of Donald Trump which is said to be of 30 vehicles have drove from the Kheria airbase to Oberoi Amarvilas hotel which is situated near the Taj Mahal complex and more than 15,000 school students have lined up on both the sides of the route holding the nationals flags of India and the United States and cheering the President of the United States as his motorcade has passed by.

The Trump couple have been greeted as massive billboards have been set up which were bearing messages and pictures of Donald Trump, the First Lady Melania Trump and also of the Prime Minister Narendra Modi as the street roundabouts have been decked up with the national flags of both the countries of India and the United States which symbolized the friendship that is being shared by the two countries.

A three layer security has been set up for the Agra visit of the US President and the premises of the monument were cleaned hours before the President of the United States Donald Trump and the First Lady Melania Trump has arrived at the Taj Mahal monument.

The Trump couple have also posed and clicked pictures for the photographers and have enjoyed the sunset from the UNESCO heritage site prior to heading to Delhi. 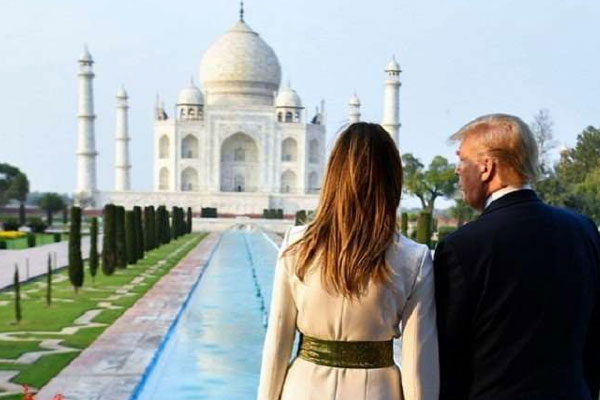 On the arrival of Donald Trump at the airbase, various performances such as ‘Mayur dance’, ‘Rai folk dance’, ‘Dhobia folk dance’ have been performed by over 250 artistes who were drawn from various parts of Uttar Pradesh to the sonorous sounds of bumrasia, nagada, dholak, mridang have added to the festive ambience.

A giant billboard has been set up welcoming the US President and the First Lady which read, “Grand welcome of the India’s best friend to the City of Love - Agra.”

Anandiben Patel who is Governor of Uttar Pradesh and Yogi Adityanath who is the Chief Minister of the state have received Donald Trump at the Kheria airbase.

A senior official has said that the convoy of the US President have travelled from the airport to the Oberoi Amarvilas hotel which is situated near the East Gate of the Taj Mahal complex.

The President of the United States Donald Trump and the First Lady Melania Trump have visited the Taj Mahal monument and have enjoyed the beauty as they strolled around and the pleasant weather has added to the beauty.

The Taj Mahal which is made up of white Makrana marble and the red sand stones is considered as one of the seven wonders in the world and is renowned for its intricate inlay work that has been done on the stone surface during the Mughal era.

This monument which is an architectural marvel has been inscribed into the UNESCO World Heritage Site in the year 1983.

Taj Mahal stands on the banks of the river Yamuna and is always high on the itinerary of the visiting heads of the state. It has also been said that this monument, Taj Mahal is one of the most photographed sites of the world.