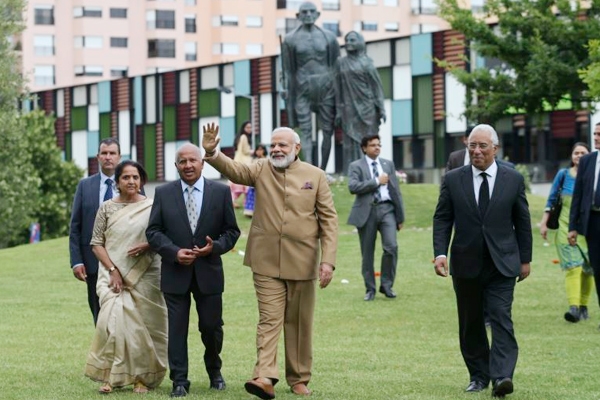 Modi Meets US Top Business Executives Indian Prime Minister Narendra Modi has met with the top U.S. business executives and also the members of Indian diaspora on his first visit to the U.S. since President Donald Trump has taken the office.
https://www.wishesh.com/ 26 Jun, 2017 26 Jun, 2017

On Sunday, the Indian Prime Minister Narendra Modi has met with the top U.S. business executives and also the members of Indian diaspora on his first visit to the U.S. since President Donald Trump has taken the office.

At a hotel meeting in the Washington with leaders of some of the top U.S. technology companies, the prime minister extolled the virtues of doing business in India where he said there was "minimum government," making it easy to do business in the South Asian nation.

Among those attending the meeting were Google's Sundar Pichai, Satya Nadella of Microsoft and Shantanu Narayen of Adobe Systems, who are all Indian Americans. Amazon chief Jeff Bezos and Apple's Tim Cook also attended the meeting.

Later Sunday, at a hotel in Northern Virginia, the prime minister met with nearly 1,000 members of the Indian community in America.

Community connect...the Indian community came in large numbers at the airport to welcome the Prime Minister to USA. pic.twitter.com/wXrZgmdkeB

On Monday, Narendra Modi is all set to meet with President Donald Trump at the White House for the first in face-to-face discussion between both the leaders. After the meeting, President Donald Trump has tweeted on Saturday that he has been looking forward to discuss the strategic issues with a "true friend".

Look forward to welcoming India's PM Modi to @WhiteHouse on Monday. Important strategic issues to discuss with a true friend!

Both the governments are working on to against terrorism, and one of the senior White House officials said: “We can expect to see some new initiatives on counter terrorism cooperation."

There is angst situation in New Delhi regarding that Trump has not paid proper attention to India, but Trump has been very positive about India during public messaging. Previously, he has visited Mumbai as a businessman, and he also has Trump-branded properties in India.

Modi, is also expected to have a meeting with the number of American CEO’s, securing a deal with the California drone-maker General Atomics for sale of the 22 Guardian (MQ-9) unarmed drones to the Indian navy for maritime patrolling, as well as a tentative deal with the Lockheed Martin and Tata Advanced Systems in order to produce F-16 fighter jet planes in India.