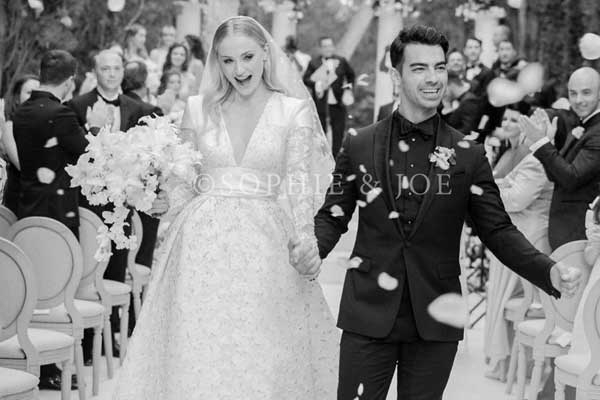 Sophie Turner and Joe Jonas Share First Photo of Their Wedding Day and It Is Every Bit Gorgeous The French nuptials marked the couple’s second wedding ceremony, as they first tied the knot in Las Vegas on May 1.
https://www.wishesh.com/ 04 Jul, 2019 04 Jul, 2019

After numerous speculations and pre-wedding pictures around Sophie Turner and Joe Jonas’ second wedding, here is the first official picture.

Sophie Turner shared the picture of her and Joe as legit bride and groom. The fans poured love and only love in the comments section.

The Game of Thrones star and Joe got hitched at Le Château de Tourreau in France on Saturday in an intimate ceremony.

In the photo, Turner, 23, and Jonas, 29, are shown walking down the aisle together hand in hand, with huge smiles on their faces. Jonas sports a smart dark suit and bowtie, while Turner is the picture of a bride in a gorgeous white wedding gown.

Speaking of the dress and the day, a source earlier told Elle, “Sophie wore a long lace dress with sleeves. She had her hair down with a veil and had light makeup. They couldn't keep their eyes off each other. It was emotional for everyone involved during the ceremony because Sophie and Joe sweetly welled up. They had such happy tears, everyone felt their emotion."

The French nuptials marked the couple’s second wedding ceremony, as they first tied the knot in Las Vegas on May 1 after the Billboard Music Awards, where Jonas performed with his brothers Nick and Kevin.

The duo arrived in France a week before their ceremony and spent time exploring Paris and partying with wedding guests as they flew into town.

“Everybody’s very, very happy for them and their family and friends are all thrilled. Everyone loves them together,” a source told PEOPLE at the time. “He was such a dater before her but their relationship was much different from the start. She was just the one for him.”

The newlyweds first announced their engagement in October 2017.