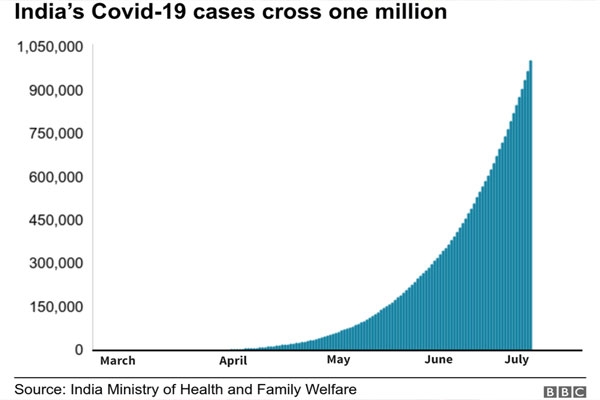 The total number of cases in India has hit 1 million and though the recovery rate is higher than the actual cases, it is a reason to worry and here is how.

The coronavirus had been declared a pandemic a few months back. The virus which is said to be originated from the Wuhan city of China has taken the world by storm. For the first time in decades the world is seeing such a severe pandemic and it is becoming to get difficult with every passing day. The world is nearing the 14 million mark but India just crossed the one million mark. Though the recovery rate in India is much higher than any other country it is getting difficult to slow the spread of the virus in such a densely populated country. India has a recovery rate of more than 63.6% which means more than 6,36,000 people are recovered. The death toll in India stands at 25,602 as of July 17th.

So the question now is if India’s recovery rate is higher than the active cases in the country why is it a reason to worry?

There are 3 types of numbers or statistical method which scares people. One is the total number of cases, the second is the number of active cases and the third is number of new cases reported daily.

The government of India is still telling that the high recovery rate is good news for the country but the number of cases every day is only rising since the day of the pandemic. The highest India reported in a day was nearly 30,000 cases in a single day.

The day-wise gap between the number of new active cases and the number of recoveries can convey a better sense of when India will begin to see light at the end of the tunnel.On the other hand, the total number of cases tells us neither how specific states might be doing nor how India is doing right now – since the metric is skewed by past data.

To explain it in simpler terms, the addition of 30,000 new cases will increase India’s total number of cases from 1 million to 1.03 million, an entirely marginal difference.

This is also why epidemics that have gone on for longer – such as those of tuberculosis and HIV – no longer care for the total number of cases.

So let’s keep an eye on the total number of cases – but have a closer watch on the width of the gap.

For example, it will be hard to challenge the Centre if it decides to impose one more lockdown now and emerges from it later claiming the total number of cases increased only marginally in percentage terms, and therefore the lockdown was a success.

The number of recovery rate does not matter so much, the one in which India needs to worry is the prevailing gap between the gap of active cases and number of cases being reported everyday which is a reason to worry if the pandemic is going to stay for a longer time.