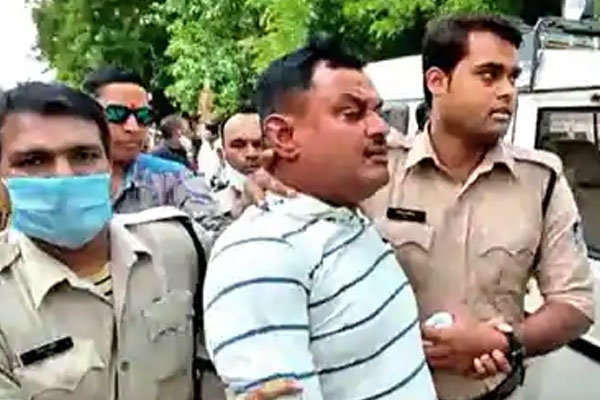 The wanted gangster Vikas Dubey killed in an encounter by Kanpur police.Top Stories

Gangster Vikas Dubey who had over 60 criminal cases against him, was arrested and later killed in an encounter in Kanpur, Uttar Pradesh.

Uttar Pradesh Police formed 25 teams to arrest him scanned over 500 mobile phones; has arrested 9 of his aides and gunned down 5 in encounters.

Vikas Dubey the wanted gangster was killed in an encounter in Kanpur, Uttar Pradesh. Vikas Dubey was arrested on Thursday and the police vehicle which was carrying him met with an accident. After the accident Vikas Dubey tried to flee the scene and at that point the encounter started. He suffered a few bullet shots and later because of the injuries was declared dead.

Last week Vikas Dubey’s hangout was discovered by the police and when the team went there and raided the place a violent shoot out happened. In that violent shoot out him and his allied escaped the place but 8 of the policemen were dead at the spot. The police was on a manhunt to chase and arrest the Kanpur gangster and also had rewarded a price to the public to help them find the gangster.

Vikas Dubey was found and arrested in Ujjain, Madhya Pradesh on Thursday. The man hunt went on for a week and the police finally arrested the gangster on the 7th day. The police vehicle reached Kanpur on Friday morning and then there was an encounter in which Vikas Dubey was announced dead.

The police personnel have been claiming that it was the encounter that killed the mob. The encounter happened at Sachendi border in Kanpur. Vikas Dubey had been declared dead and 4 other police officials have been injured in the encounter which happened this morning.

The arrest of Vikas Dubey happened outside of the Mahakal Temple in Ujjain city of Madhya Pradesh. On the same day two of his allies were killed in two separate encounters.

The Uttar Pradesh Special task Force Team was bringing Vikas Dubey in a police vehicle from Ujjain to Kanpur. On the border of Kanpur on Friday morning an accident occurred in the Barra area where Vikas Dubey tried to take advantage of the accident and got out of the vehicle snatching a pistol from one of the Special Task Force (STF) personnel and tride to run away.

The police personnel also informed that they asked Vikas Dubey to surrender, but he rather shot bullets at one of the STF personnel.

A violent shoot out happened and both the sides were firing bullets. In the retaliation, some shots directly hit Vikas Dubey and left him injured. He was taken to Lala Lajpat Rai Hospital in Kanpur where the doctors said he succumbed to his injuries and declared him dead.

The postmortem report is still not out yet and in other news there has also a report which says that media persons who were following the vehicle in which Vikas Dubey was being carried to Kanpur were stopped by the police in Sachendi area of Kanpur around 6:30 am in which the criminal Vikas Dubey was killed. Earlier visuals have been leaked on the internet where police officials stopped the media for following the convoy right before the encounter happened.