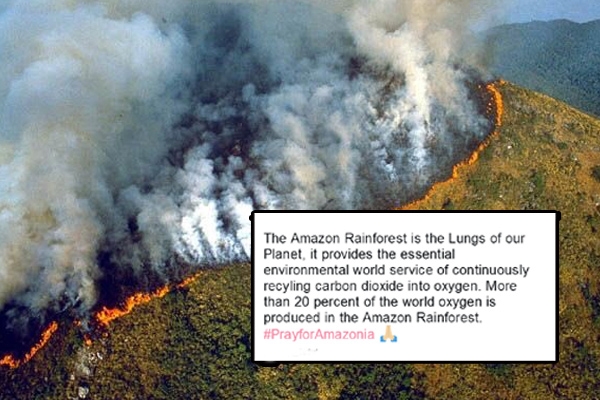 In Pictures: Devastating Fires in Amazon Rainforest Visible From Space The wildfires spreading across the Amazon is so massive and thick that it was picked up by NASA.
https://www.wishesh.com/ 22 Aug, 2019 22 Aug, 2019

On Monday afternoon, Brazil’s Sao Paulo completely plunged into darkness for about an hour as powerful winds carried the smoke from Amazon rainforest’ fire burning nearly 2,735 km away.

The wildfires spreading across the Amazon is so massive and thick that it was picked up by NASA. The wildfires can be seen from the space, according to the new images from the National Aeronautics and Space Administration (NASA).

Amazonas, the largest state in Brazil, has declared emergency over the forest fires. The videos and images doing rounds on social media showed vehicles driving with their headlights on.

Smoke from wildfires in the #AmazonRainforest spreads across several Brazilian states in this natural-color image taken by a @NASAEarth instrument on the Suomi NPP satellite. Although it is fire season in Brazil, the number of fires may be record-setting: https://t.co/NVQrffzntr pic.twitter.com/4JTcBz9C8f

The World Meteorological Organization (WMO) said that on Tuesday, the smoke had moved to the Atlantic coast. According to the National Institute for Space Research (INPE), the record number of fires were reported this year.

Since January, Amazon rainforest has suffered over 72,000 fires, an 84 percent increase over the same period last year. Most of the fires were reported in the Amazon region.

Everyone help please. We need to reserve our forest. It's been burning for three weeks. Come on. We need to create global awareness. #PrayforAmazonia https://t.co/pvjsJA7iji

I am a Science teacher upon seeing these photos it breaks my heart.

When are we going to learn the importance of biodiversity?#PrayforAmazonia pic.twitter.com/chhDrv5hlJ

My heart is breaking, our beautiful Amazon is on fire, and has been for 2 weeks!! #PrayforAmazonia #PrayForTheAmazon #AmazonFire #AmazonRainforest pic.twitter.com/kjsFC5nM9W

just a heads up that forest fires are man-made disasters so none ya'll say, '' I didn't do it ". we all are responsible for this damage. #PrayforAmazonia pic.twitter.com/pxakyqzF8M

Found this picture on the Internet. This is truly heartbreaking. Dear animals, I'm sorry for what human have done to you. #PrayforAmazonia pic.twitter.com/B2htd8prdF

The Amazonia has been burning for three weeks!