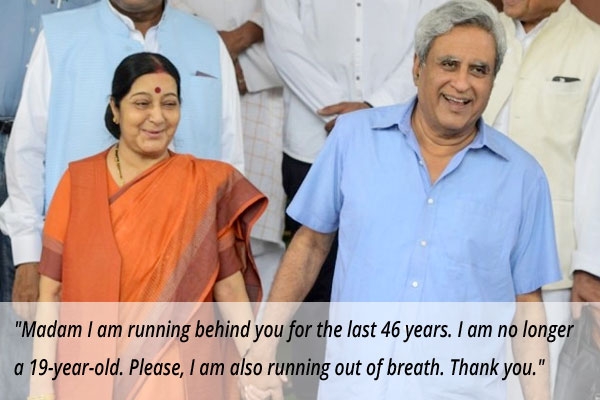 ‘Madam I Am Running Behind You’: Heartfelt Letter by Sushma Swaraj’s Husband on Her Retirement Swaraj Kaushal supported Sushma Swaraj when she was in politics and also when she chose to quit.
https://www.wishesh.com/ 07 Aug, 2019 07 Aug, 2019

‘Madam I Am Running Behind You’: Heartfelt Letter by Sushma Swaraj’s Husband on Her RetirementTop Stories

Sushma Swaraj, who passed away on Tuesday evening, worked towards the betterment of the people for decades and especially as an external affairs minister in the past five years, she never failed to help Indians stranded abroad.

Swaraj joined Bharatiya Janata Party in the year 1984 and was eventually appointed a secretary of the party. Since then her husband and fellow lawyer Swaraj Kaushal was there through this long journey. He supported her when she was in politics and also when she chose to quit.

Last year, when Sushma Swaraj declared that she will not be contesting elections owing to a severe medical condition, Swaraj Kaushal wrote: “Thank you very much for your decision not to contest any more elections. I remember there came a time when even Milkha Singh stopped running. This marathon has been on since 1977-that is 41 years. You have contested 11 direct elections. In fact, you contested all elections held since 1977 except when the party did not allow you to contest in 1991 and 2004.”

"Madam I am running behind you for the last 46 years. I am no longer a 19-year-old. Please, I am also running out of breath. Thank you," Swaraj Kaushal had said.

The veteran BJP leader died due to cardiac arrest in New Delhi.