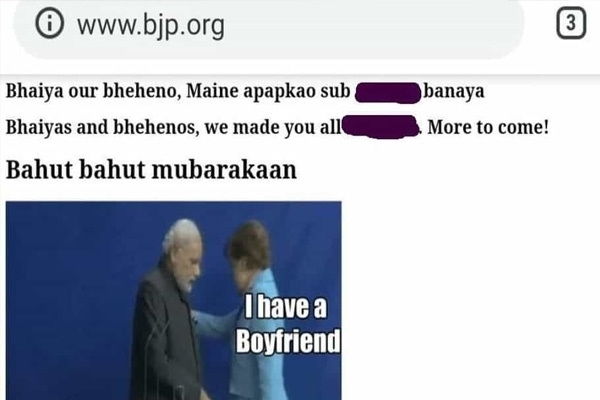 The official website of the Bharatiya Janata Party (BJP) was hacked early on Tuesday morning and is currently on maintenance mode.

The hackers featured memes on Prime Minister Modi, which in no time went abuzz on social media with screenshots.

But, while trying to open the website, it showed the message saying: "We will be back soon! Sorry for the inconvenience but we're performing some maintenance at the moment. We'll be back online shortly."

The website of the country's ruling political party stopped functioning amid brewing tensions between India and Pakistan following the Pulwama terror attack in Jammu and Kashmir in which 40 Central Reserve Police Force personnel were killed.

In the same week, Pakistan's Ministry of Foreign Affairs website was not working in several countries including the United States.

According to a report in the Dawn, cross-border hacking attacks have been sporadic yet common since at least 1998.

करारा जवाब मिलेगा
Whoever has done this to @BJP4India ....We will enter their servers and give a befitting reply#BhaktBanerjee pic.twitter.com/Udr64ASSwE

BJP can't prevent their own website from getting hacked and are governing a nation of '6 billion' people. #NamumkinAbMumkinHai pic.twitter.com/uQDLgJC9s2