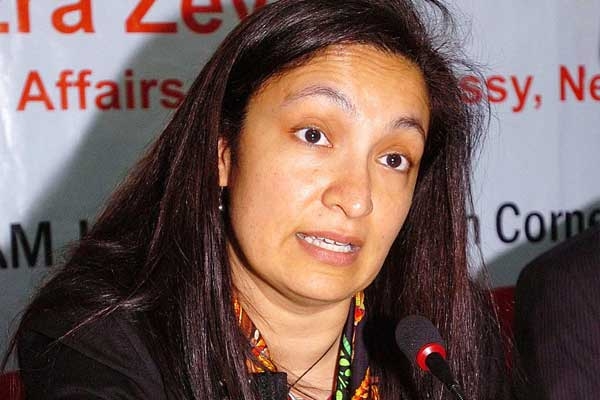 Uzra Zeya Quits U.S. State Dept. Over Racist, Gender Bias Zeya is one of several diplomats of Indian-origin who rose through the ranks of the State Department in the Bush, Clinton, and Obama era.
https://www.wishesh.com/ 25 Sep, 2018 25 Sep, 2018

An Indian-American diplomat Uzra Zeya has quit the U.S. state department alleging sexist and racial discrimination in a Trump administration trend that she says involves "the exclusion of minorities from top leadership positions in the state department and embassies abroad".

After serving for over 25 years, the United States-born diplomat daughter of Indian immigrants has resigned from state department.

"In the first five months of the Trump administration, the department's three most senior African-American career officials and the top-ranking Latino career officer were removed or resigned abruptly from their positions, with white successors named in their places. In the months that followed, I observed top-performing minority diplomats be disinvited from the secretary's senior staff meeting, relegated to FOIA (Freedom of Information Act) duty (well below their abilities), and passed over for bureau leadership roles and key ambassadorships," Zeya wrote in Politico last week, accounting the eclipse of minorities after Trump became the president.

According to her analysis of public data from the American Foreign Service Association, 64 percent of Trump's ambassadorial nominees so far have been white non-Hispanic males, a 7 percentage point increase from the eight years of the Obama administration.

"A 25-year upward trend that saw the percentage of female ambassadors increase with every administration since President Bill Clinton has now been reversed," she wrote.

Zeya's accounts are challenged by the Mike Pompeo-led state department, whose spokesperson says the secretary "has placed incredible emphasis on staffing up the state department and increasing diversity as well as reinvigorating and restoring the finest diplomatic corps in the world".

Zeya last served overseas as the charge d'affaires and deputy chief of mission at U.S. Embassy in Paris from 2014 to 2017.

"In my own case, I hit the buzz saw that Team Trump wielded against career professionals after leading the U.S. Embassy in Paris through three major terrorist attacks over three years and after planning President Trump's Bastille Day visit. Upon returning to Washington, as accolades for the president's visit poured in, I was blocked from a series of senior-level jobs, with no explanation. In two separate incidents, however, colleagues told me that a senior state official opposed candidates for leadership positions-myself and an African-American female officer on the basis that we would not pass the 'Breitbart test'", she writes.

"One year into an administration that repudiated the very notion of America I had defended abroad for 27 years, I knew I could no longer be a part of it, and I left government earlier this year," she explained.

Zeya is one of several diplomats of Indian-origin who rose through the ranks of the State Department in the Bush, Clinton, and Obama time period resulting in some of them being appointed to ambassadorships.