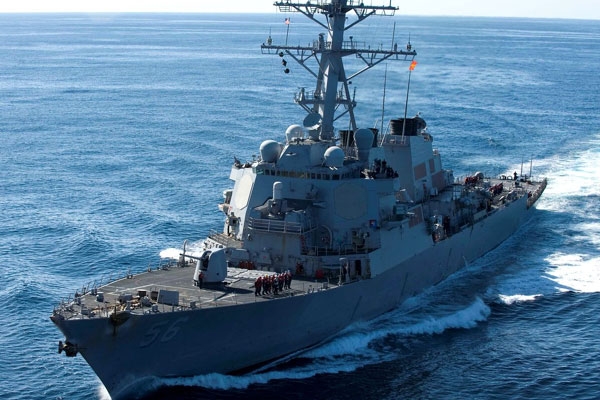 Rescue Operation Underway, For 10 sailors of US Warship

Rescue Operation Underway, For 10 sailors of US WarshipTop Stories

At least 10sailors went missing after US warship John S McCain collided with Alnic MC east of Singapore, near the Straits of Malacca in the early hours.

US navy in a statement said, Initial reports indicate John McCain sustained damage to her port side aft, currently 10 sailors are missing and 5 are injured, rescue operation is underway in coordination with local authorities.

This 154 meters McCain is named after US Senator John McCain’s father and grand father whose were US admirals.

On this incident Senator John McCain has tweeted that “ Cindy and I are keeping America’s sailors abroad the US’S John McCain in our prayers tonight, we appreciate the work of rescue & search crews.

Graham Ong-Webb, a research fellow at Singapore’s S.Rajaratnam school of international studies, that the accidents show gaps that could be exploited by enemies of united states.

He also said, Human error is clearly at play, These accidents happened at the dead of night when it’s easy to be complacent and it’s difficult to see at sea.

The rescue operations involve tug boats, a helicopter and a police coast guard vessel, and US air craft were also responding, said navy. The collision was reported in early hours at 5:24 a.m with a oil tanker used for transporting oil and chemicals weighing around 30,000 tonnes.

This was the second collision of warship in recent times.

The US John McCain is a part of US seventh Fleet, and its home base is in Yokosuka in japan.