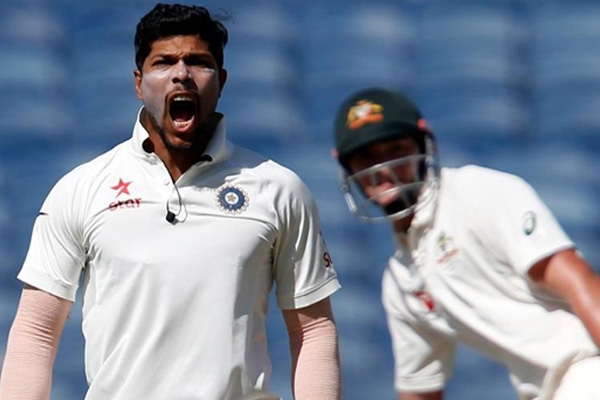 India Dominates Australia on Day 1 The day 1 of the 1st India vs Australia Test in Pune put the home team in a commanding position as the day one ended
https://www.wishesh.com/ 23 Feb, 2017 23 Feb, 2017

The day 1 of the 1st India vs Australia Test in Pune put the home team in a commanding position. Umesh Yadav the right arm pacer took impressive four wickets and was ably supported by the Indian spinners as Australia ended the day at 256/9.

Umesh boosted up his delivery after the tea session as he took three quick wickets in the form of Matthew Wade, Steve O'Keefe and Nathan Lyon.

The visiting were just 153 for at tea with Matt Renshaw (38), who returned to bat after earlier retiring with a stomach upset, and Mitchell Marsh (2) batting at the break.

Ravichandran Ashwin pocketed Smith late in the afternoon session as Smith braved the heat for his dogged performance 27 runs off 95 balls.

Smith had a crucial partnership run with Shaun Marsh (16) and Peter Handscomb (22) before giving away a catch to Indian skipper Virat Kholi at mid-wicket.

Australia’s furiosity was calmed with the key wicket of David Warner (38) and with the temporary retirement of the left handed Renshaw on 36.

Warner impressively tackled the Indian spinners with good foot movement. But he was bowled by Umesh off a good length delivery that hit the bat first en routing to stumps.

The match is the first in a four-Test series between the world's two top-ranked sides.

Ashwin the ICC Cricketer of the year