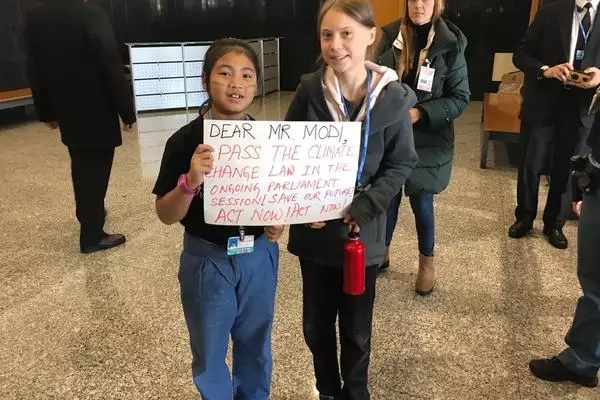 Licipriya Kangujam, an 8-year old activist hailing from Bashikhong in Manipur is one of the youngest speakers at the 2019 United Nations Framework Convention on Climate Change held in Madrid from December 2.

She has come to tell the world leaders that it was the time to act and its an emergency for the climate. Her passion towards the fight against climate change made her spend weeks in front of Parliament with a playcard, urging Prime Minister Narendra modi and MPs to pass climate change law to control and regulate the emission of carbon which made a way in the news earlier.

Licypriya Kangujam made a mark with Spanish newspapers addressing her as ‘Greta’ of the Global South. Licypriya has already spoken in 21 countries on climate change before speaking at the COP25 climate conference in Madrid.

Licypriya said that, they had nor received any help from the government for her trip to the COP25 despite her appeal to the Environment Minister Prakash Javadekar and that she had not been able to meet the Minister at the event. She added saying her trip was later on, sponsored by the Spanish Government and the European Climate Foundation.

She demanded the Indian government to pass a climate law in order to ensure zero carbon emissions, to ensure that students need to plant a certain amount of trees in order to get their degree by making climate change a compulsory subject in school.

KK Singh, said that his daughter Licypriya is the youngest climate activist in the world. When Kanujugam was just six years old, she got an opportunity to attend the 3rd Asia Ministerial Conference for Disaster Risks reduction 2019(AMCDRR 2018) in Ulaanbaatar, the capital of Mongolia, he added.

"I cry when I see children losing their parents and people becoming homeless due to danger of disasters. My heart feels sorrowful for people who can't help themselves when disaster strikes. Many root causes are the impact of climate change," she said.

‘The Child Movement’ was an organization started by Licypriya with the help of her father which strives to call the world leaders to save the planet and the future of children by taking immediate actions.

"Why should I come here? Why I should speak here? I have to go to my school. I have to read my books. I have to play. I have to study. But our leaders all have ruined my childhood life and my beautiful future. This is not fair!" she said.

She states that she wants to become a space scientist as she wanted to launch a rocket to the moon or Mars and research on the life conditions there, as planet earth is going to end up in near time.

Referring to the 2015 Paris Climate Agreement of limiting global temperatures to 1.5 degrees Celsius by 2030, she said that the governments must come in action as they have promised to do so.

Licypriya Kanjugam said that she was inspired by the works of Mahatma Gandhi, APJ Abdul Kalam who was our former President and Greta Thunberg, a 17 year old Swedish climate change activist.