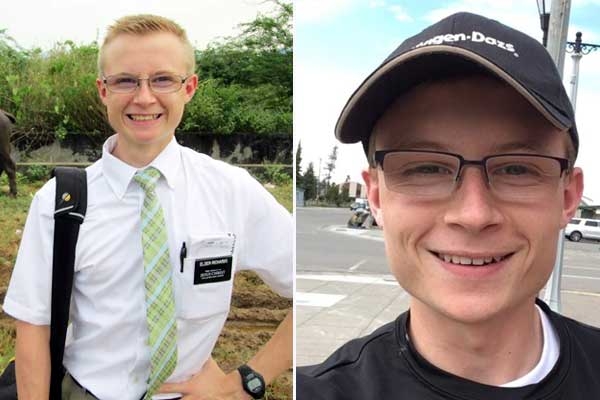 Meet Isaac Richards, an American Guy Who Is Winning the Internet with His Flawless Telugu “I really like the Telugu language. My heart is for Andhra Pradesh forever).”
https://www.wishesh.com/ 16 Jul, 2019 16 Jul, 2019

Meet Isaac Richards, an American Guy Who Is Winning the Internet with His Flawless Telugu

Meet Isaac Richards, an American Guy Who Is Winning the Internet with His Flawless TeluguHot Buzz

Foreigners visiting India and doing all one can to become competent in local language slowly but surely is not an unheard-of thing. But a native of the United States living in Utah, is doing rounds on the internet for his flawless converse in Telugu.

Isaac Richards, an American citizen, has a huge fan following in India currently.

In a video that has gone viral on Facebook, customers are seen cheering and clapping for Richard’s commendable flair for the south Indian language as he effortlessly makes conversation with his customers.

Isaac Richards's video was taken by a group of Telugu customers who visited his ice-cream outlet Haagen Dazs, in Montana. The video was later posted by Hyderabad man Ganesh Kesana, and it now has 2.7 lakh views and more than 6,400 shares on Facebook.

“Meeru rakamundu Hyderbadulo unaara?" (Were you in Hyderabad before you came here?) Richard further asks the customers who are totally baffled listening to the U.S. man matching their skills in Telugu. Richards, a missionary and human rights student, explains that he was in Hyderabad before and that he has also spent a year each in Visakhapatnam and Vijaywada. He eloquently ends the conversation with a "Dhanyavadulu".

After Ganesh Kesana posted the video on his Facebook page on July 9, Richards soon became internet famous in India. Overwhelmed with the response, Richards posted a video saying he was from the United States and not New Zealand as some people had assumed. Throughout the video, Richards, who is wearing a Haagen Dazs T-shirt, speaks in fluent Telugu using very few English words.

“How is everyone in Andhra Pradesh and Telangana doing?” Richards begins his video with polite greetings. He goes on to explain that he works in an ice-cream shop in Montana, frequented by a lot of foreign tourists every day. “But I still don’t understand why the customers found it so unusual seeing me talk in Telugu,” Richard wonders, adding, “But I cannot believe the video has got so many views and so many people have watched it. I really like the Telugu language. Andhra Pradesh naa gundello undhi” (My heart is for Andhra Pradesh forever).

“Telugu marchipokudadhu! Chala manchi basha adhi (Don't forget Telugu! It's is a very good language),” Richard wrote on his Facebook page, sharing the video. He has also promised his Indian fans that he will post new videos and jokes, and also explain how he learned the language, all in Telugu.