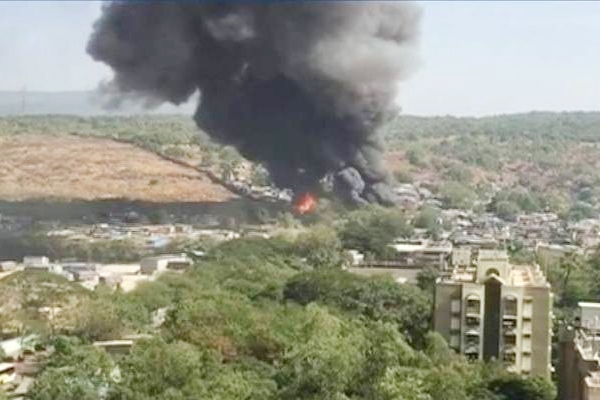 A massive fire has broken out in a slum area in Kandivali suburb of north Mumbai, triggering a series of gas cylinder explosions. Two feared dead.

A resident from a nearby area said that he had "heard a loud blast and then 20-30 explosions one after the other."

"We received a call at about 12.33 pm. Immediately, 16 fire engines, 12 water tankers and five fire brigade officials were rushed to the spot," a senior fire official said.

A plume of black smoke is rising above a densely populated area. The place is reportedly located in a congested colony, making it difficult for fire tenders to reach the site. The place is said to house a number of godowns.

According to reports, the cylinders were allegedly stored in a godown and the building is adjacent to the Western Express Highway. There could be  lots of damage as the fire is in a residential area.

Officials stated that the cause of fire was unknown.

Video via Indian tweeple: huge fire broke out, apparently as a result of series of cylinder blast, pic.twitter.com/hILk2p5G3o in Mumbai