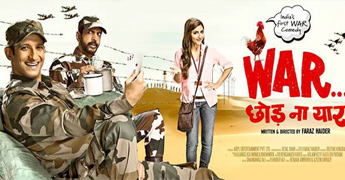 War Chhod Na Yaar is a one-of-a-kind-of a film, given its the first war comedy to be made in India. Spoofs as such are common in the West and popular too, but this is for the first time that a filmmaker has tried his hands in this alien genre.

In the past, we have had movie makers dish out scathing movies on Indo-Pak war, but never before has any of them tried to sweeten up the sensitive relations between the two nations by incorporating humor into the plot. But then, since it's an avant-garde move on the part of the maker, the big question is how the audience mange to lap it up. Does director Faraz Haider's gamble pay off? Let's find out!

Humour is a weapon.. 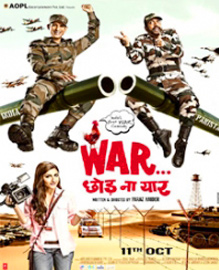 This light-hearted war movie not only treats the serious issues in light vein, but also makes a comic dig at politicians on both sides, unsparing even the intruders like China and America. The tongue in cheek humor is palpable, and though the amusement is certainly over the top, the comic gags successfully drives the message home — 'No' to warfare or hostility. But even while the intentions are right and most honorable, the film end up looking like a half-hearted, amateurish attempt. The film orbs round the tumultous relationship between Indian and Pakistani soldiers. However, the story takes a turn when war breaks out.

Faraz Haider's celluloid attempt to depict the humane and compassionate side of the soldiers is indeed fresh. Of course, he takes cinematic liberties while emphasizing the issue. While the first half portrays the camaraderie between India and Pakistan soldiers, the post-interval parts flags off a rather precarious situation: What happens if a war breaks out and the soldiers of both nations are forced to wage a war? It's here that the film botches up.

The screenplay of the film is highly unconvincing. The soundtrack is situational and mediocre. The cinematography, though eye-catching, fail to render any value to the film.

Full marks to Sharman Joshi and Jaaved Jaaferi for their lovable performances. Sharman acts out his part diligently, while Jaaved's versatility shines through in the movie. Soha Ali Khan in the role of a journalist, plays her part credibly. Dalip Tahil does an impressive job so does Sanjay Mishra.

Final Word:
On the whole, War Chhod Na Yaar is a novel attempt, but the amateurish treatment kills all joy here. 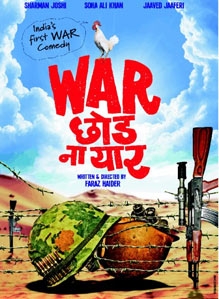